Some of the country's biggest tech companies are hoping devices they produce can lock a consumer in an "ecosystem" of their own content and ads. 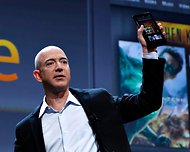 In the old days, you listened to music on your iPod while exercising. During an idle moment at the office you might use Google on your Microsoft Windows PC to search for the latest celebrity implosion. Maybe you would post an update on Facebook. After dinner, you could watch a DVD from Netflix or sink into a new page-turner that had arrived that day from Amazon.

That vision, where every company and every device had its separate role, is so 2011.

The biggest tech companies are no longer content simply to enhance part of your day. They want to erase the boundaries, do what the other big tech companies are doing and own every waking moment. The new strategy is to build a device, sell it to consumers and then sell them the content to play on it. And maybe some ads, too.

Last week’s news that Google is preparing its first Google-branded home entertainment device — a system for streaming music in the house — might seem far afield for an Internet search and advertising company, but fits solidly into an industrywide goal in which each tech company would like to be all things to all people all day long.

"It’s not about brands or devices or platforms anymore,” said Michael Gartenberg, an analyst at Gartner. "It’s about the ecosystem. The idea is to get consumers tied into that ecosystem as tightly as possible so they and their content are locked into one system.”

So Facebook, which has half of its users accessing it from mobile devices, has dabbled in phones and is said to be moving even more firmly in that direction. Apple, once just a computer maker, already gets most of its profit from mobile devices and is eyeing televisions, which would play content from iTunes.

Amazon created the Kindle Fire tablet, and there is intense speculation it is developing a Kindle Phone — a prospect that became more believable two weeks ago when Microsoft’s senior director of Windows Phone development, Brandon Watson, joined the retailer. He said the opportunity, which he did not specify, was "too big to pass up.” Microsoft, which has tightened its relationship with Nokia to again be a major player in phone software, has placed its Xbox in millions of living rooms as a home entertainment portal.

Reports of the new Google device come just as the search giant’s $12.5 billion purchase of Motorola Mobility is expected to close, giving Google direct control over one of the companies that uses its Android phone operating system — and presumably more of an ability to extend its reach.

None of these companies will reveal what they are doing in the future. (Amazon will not even reveal what it did in the past; try asking it how many Kindle Fires it has sold.) News of the Google device became public only after a blogger found a Federal Communications Commission filing on it.

But their hiring trends give a clue. Their job boards, once a repository for all kinds of software jobs, are brimming with positions for people with degrees in electrical engineering and hardware design.

On Amazon’s Web site, for example, the boards have dozens of listings for jobs with titles you might expect at a hardware company. Among them: Senior Hardware Engineering Manager, Director, Hardware Platforms and Systems, and Hardware EE Reliability Engineer. (EE is short for electrical engineer.) Many of these jobs point to positions within Lab126, the California-based unit within Amazon that is responsible for the Kindle — but with so many open positions, the lab seems likely to be working on other gadgets.

At Google, the boards show plenty of opportunities for people who understand the underbelly of a microchip: Communications Hardware Engineer, Electrical Hardware Engineer and Technical Program Manager for the Android@Home team, which previewed a "conceptual” version of an entertainment device last year. That last job posting underlines the need for creating "immersive and portable versions of our products.” Just like Facebook, Google cannot afford to be left behind in a mobile world.

Before the advent of coordinated systems, executives at consumer technology companies babbled endlessly about connected homes and convergence. They tried to make that happen, but no one had the pieces of hardware and content that would fit together seamlessly.

The pioneer — and perhaps the inspiration — was Steven P. Jobs, the late Apple chief executive who made creating devices look easy with the iPad and iPhone. Dream them up, then make the software complement the hardware, outsource the production, sell at a premium and watch your company become the most valuable on earth.

But the tech landscape is littered with the wreckage of those who tried to capture some of Apple’s magic. Ask Research in Motion, HTC or Hewlett-Packard about their experience with tablets and they will not show joy.

Even when the system is successful, things can go wrong. Despite a captive audience, the management can feel an urge to force-feed, upsell or otherwise take advantage. It is probably not a coincidence that much of the lingo of these systems borrows from prison, starting with "locked in.”

Successful as Amazon and Apple have been with their devices, there are periodic signs of disquiet. Early users of the Kindle Fire reported trouble getting their own content on the device. (Downloading Amazon content? No problem.) Apple just made it easier for people to create content with its iBook Authors book creation tool, provided the author does not want to sell it through anyone but Apple. That sparked some negative reaction.

As for Google and its acquisition of Motorola Mobility, just how a high-margin Internet operation will mesh with a low-margin manufacturer with 19,000 employees has been the subject of much speculation; still, there are plenty of ways for Google to leverage Motorola.

As an example of how Google will use hardware to push software, Mr. McDevitt cited Google Wallet, a cellphone payment system released last fall. Google put a lot of work into this software. It had 150,000 retailers deploy near-field communications readers so all a customer would have to do to buy a pack of Juicy Fruit was wave a smartphone. It had Citigroup encourage its MasterCard holders to use Google Wallet as an extension of their credit cards.

So what stopped Google Wallet from taking off? Probably the fact that it works only with a Google Nexus phone, not exactly the most popular phone out there.

"The next new Motorola phone will undoubtedly come preinstalled with the Google Wallet near-field communications chip,” Mr. McDevitt concluded in a report last fall. "And where Motorola leads, the other handset manufacturers using Android are likely to follow.”

Where the entertainment player will fit into the Google landscape is unclear. It could shore up Google Music, a free cloud service that lets people buy tracks from the Android Market and listen to songs from their various Internet-connected devices.

When Google introduced Google Music last November, the company marketed the service as a way for its users to share and discover new music with its social media feature Google Plus. But it has failed to sign up Warner, one of the top four music labels, and users have criticized the sharing feature as confusing.

"Who knows how the model is going to play out?” said Andrew Murphy, an analyst at Piper Jaffray. "Google doesn’t know yet. But if you aren’t building it today, then you aren’t winning in five years.”